We have been working with AFC Wimbledon Football Club for five seasons and we are pleased to announce a continuation of our partnership. AFC Wimbledon have returned to their spiritual home, the newly built Plough Lane Stadium in Wimbledon and we are proud to to be their Official Hospitality Partners for the 2021/2022 campaign. 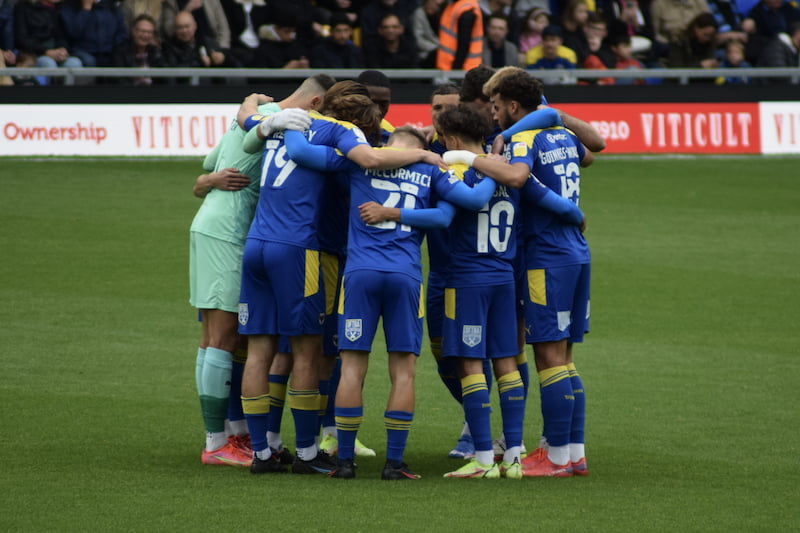 “Why do we work with AFC Wimbledon? They are more than just a Football Club. They are a family”, according to Sales Director Nicholas Gibbs, who also happens to be a big fan. “Wimbledon didn’t have a team until 2002. The local fans reformed the club and climbed the football leagues, breaking records along the way and gaining a sizeable fan base and fantastic reputation. Ask any football fan their opinion on the Club and you will hear nothing but positives. Everyone loves AFC Wimbledon! There are obvious commercial benefits for Viticult too.

For example, to be affiliated with such a reputable football club only boosts our already solid reputation.

​“The advertising around the pitch during matches, some of which are televised, the branding throughout their swanky new Hospitality Lounges and dining areas, these factors are commercially appealing. Also loyalty is a factor. Given the grandeur of the new stadium combined with the fact that the borough of Merton where AFC Wimbledon are based is one of the wealthiest in London, they could have chosen anyone to work with but they chose Viticult”.

We have been fortunate to be part of AFC Wimbledon’s journey since 2015. This includes their promotion in 2016 into League One where Bayo Akinfenwa, also known as the Beast, and Lyle Taylor (pictured) famously scored the goals which continued the clubs magnificent rise through the football leagues.

The History of AFC Wimbledon

The club was formed as 'Wimbledon Old Centrals'

Founded as the Wimbledon Old Centrals, they played as a non-League team for most of their history. They won eight Isthmian League titles, the FA Amateur Cup in 1963 and three successive Southern League championships between 1975 and 1977. They were then elected to the Football League. The team rose quickly from obscurity during the 80’s and were promoted to the First Division in 1986.

Wimbledon settled at Plough Lane in 1912 and played there until 1991, producing many unforgettable moments such as the one pictured. In 1988 Wimbledon won FA Cup against Liverpool.

The unpopular decision to move Wimbledon FC to Milton Keynes

Wimbledon was relocated over 50 miles north to Milton Keynes much to the dissatisfaction of the local fan base who felt that their team was unjustly stolen. The rivalry that exists today is one of the most famous in modern football.

AFC Wimbledon was formed and entered into the ninth tier of English football. The club has since been promoted six times in 13 seasons going from the ninth tier to the third tier, League One. AFC Wimbledon currently hold the record for the longest unbeaten run of league matches in English senior football, having played 78 consecutive league games without a defeat between February 2003 and December 2004. They are the first club formed in the 21st century to make it into the Football League. Initially Wimbledon were based at Kingsmeadow, a ground shared with Football club Kingstonian FC. In December 2017 the club received permission to begin work on the construction of a new stadium which is 250 yards away from Plough Lane.

Viticult became AFC Wimbledon’s Hospitality Sponsors and good luck charm in the 2015/16 campaign which saw them promoted to League One.

We are extremely proud to be a part of the AFC Wimbledon story and look forward to their return to Plough Lane for the new football season and continuing the already strong partnership we share.